In Posts, Pro-Healer by Angela Matarrese

The best advice I ever received came from a family member about 10 years ago. I don’t remember what I was saying (probably something really nice) when an uncle interrupted me abruptly and said, “You are one of those people that just wants everyone to like you! I can’t stand you people. You need to let that go.”

Maybe I should have been offended, but instead I felt immediately showered in light. I didn’t have a response for him. I think I just giggled, shed a tear, and said, “Yeah.” Though his comment was true, and I remember it well, I’m not sure I have done much to change from that people pleaser mode since then.

I also recall a moment early in my Interior Design career when my boss at the time pulled me into her office. She wanted to take me off one of the accounts I really enjoyed. When I objected and asked her why, part of her response was, “You are so nice and everybody likes you.” I was young and didn’t understand what that meant at the time, so I felt deeply rejected and treated unfairly. Looking back now, she could have had a clearer explanation that a more assertive type of personality was needed for that account.

Synchronistic things have been happening this past month bringing my “niceness” as a limiting belief to the forefront of my mind.

First was a conversation with a family member about gaining weight. As they talked about the weight gain, they clearly knew the habits contributing to it and had reasons why they won’t change. Rather than sprinkling in my expertise on lifestyle and habit evolution, I simply listened and nodded like a bobble head because I’m so “nice.” 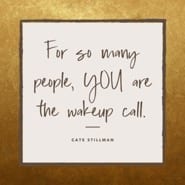 The third synchronicity came while reading Jim Kwik’s new book Limitless. He explains how the word nice is originally derived from the Latin word nescius, which translates to ignorant.

Ok. Message received. Being nice is my limiting belief! On the surface being nice seems like a good thing, so how could niceness be inhibiting my growth, and therefore my community’s growth? I began to notice that to maintain my nice persona, I have been keeping myself small to not step on anyone’s toes or risk challenging other’s viewpoints, keeping all of us more ignorant. If I was truly nice (in the positive way I originally thought of its meaning), I would want to speak my truth to help others wake up and not hoard all the lovely information I acquired for myself. Yikes.

What small incremental step can I take to maintain being “nice,” while also being truthful with my deeper purpose? I will be kind instead of nice. Kind is derived from inherent nature. To be kind is to habitually embody both candor and care.

I will go back to Cate’s quote to reassure myself. “For so many people, YOU are the wakeup call.” From now on, I will be kind. To be kind I will stay present to my inherent nature and what I aim to bring to the world in every interaction–in person, virtually, over the phone–rather than just “being nice” and having everyone like me. When my uncle called me out on that back in the day it wasn’t very nice; it was honest though, and I love him forever for what he said. We all have the ability to help another person wake up at any moment. I’m not sure he was looking to wake me up and probably hadn’t worked to acquire any specific skills to do that, but he still did through kindness. He was kind because he was speaking his truth and not looking to be a people pleaser.

I admit, even when I look at this Kaizen move toward kindness, my body tenses up. Starting to speak honestly after decades of being nice will be uncomfortable and ineloquent at first. People may not feel I’m super nice and like me. You know what is even more uncomfortable and ineloquent though? Filtering myself based on my assumption of how others will perceive me, rather than coming from a place of candor and care.

I always thought of limiting beliefs as more negative things such as, “my parents have heart disease, so I will too.” It’s been mind and heart opening realizing a personality trait I always thought of as positive has also been limiting me. This feels like identity evolution at its finest!

Interior Designer, Yoga Teacher, and Yoga Health Coach. Founder of Sukha Yoga Design, which is a culmination of all of that. Born and raised in Wisconsin, I have some beer and cheese in my blood, and will always be honored when referred to as the "super nice mid-western girl" in my travels. As I maintain a relaxed and "chill" facade in life, the truth is that I am super excited most of the time and bursting with things that I still want to learn and share with the world.