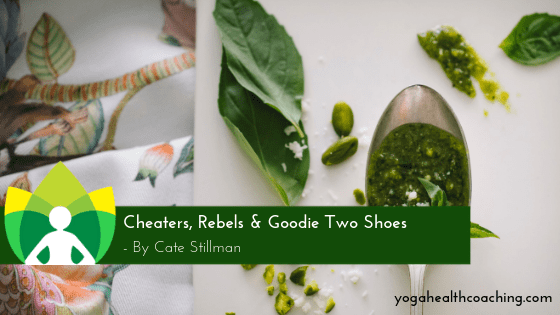 In Posts by Cate Stillman

The Yogidetox is moving into full swing

My body and mind are very accustomed to this process

If I were to to skip my seasonal inner refinement expedition, I’d have a cellular insurrection on my hands While I’m obviously a seasoned seasonal yogidetoxer there is something you should know:

Rebels are Cheaters during a detox

I’ve resisted authority since I can remember

Naturally, my mom was the first victim of my rebellious behavior

I was a stubborn kid with a know-it-all attitude

and a sharp whippersnapper at that

I didn’t have a complacent bone in my body

What does this have to do with detox?

my rebel shows up in full swing…

With EVERY detox, I’m sure to quickly encounter my inner rebel

My rebel is totally fine with the detox overall

But… she is totally not fine with the rules

She HAS to break the rules

The Inner Goodie Two-Shoes will be laid to R

I’ve settled into the camp of guided inner exploration

Figure it out as you go along

How I deal with my Detox Rebel

Basically, I give into her

She spoke at the World Domination Summit last July about her classification system of the 4 Types of People: Me and my husband landed squarely in the Rebel category

He hated Ayurvedic kitchari detoxing…and would rebel by not eating

So I started having him juice i

One detox he did the Edgar Cayce Apple + Black coffee detox

He loved it… detoxing with Black Coffee

Back to Gretchin’s system, I see a Questioner as a Rebel – and obviously not a rule-follower

I associate the Upholder and the Obliger with Goodies Two-Shoes

I  break the system into two camps: Rebels and Goodie Two Shoes

Duality is just easier in this case

Are you a Rebel or a Goodie Two Shoes?

Goodie Two-Shoes love the structure of a detox

They want a menu schedule and a grocery list

They like checking off boxes and following the rules

They are going to do this detox right b

Rebels may be fine with the intuitive mind-body healing… but they’ll still find a way to lie, cheat or steal in the process

Why I let my Rebel cheat

I’ve found if I let me Rebel cheat a bit – especially at the beginning of a detox, a certain peace is made

I’ll have a square or two of dark chocolate

I’ll have a handful of raisins

or have a bowl of miso soup during a Master Cleanse

How rebellious… I know

When a Goodie Two-Shoes Cheats

Where the rebel just needs to break the rules… the Goodie Two-Shoes won’t stop there, but will go hog wild

As rebellious as I’ve been, I’ve never eaten a whole chocolate bar (or whatever) while cleansing

Without fail, every yogidetox cycle brings a Goodie Two-Shoes out of the closet

Most rebels won’t go that far

I find this hilarious

The Rebels are actually less rebellious that the Goodie Two-Shoes The basic teaching of detoxing is to figure yourself out

You need to sit your butt on the cushion

You need to limit caloric intake

When you do this, inner universes are revealed

That’s why I do it seasonally

And in the process, we get to become besties with our subconscious tendencies

When that happens, we and the world are better off for it

Yes, you can still join us in the October Yogidetox

Many won’t start their detox until November