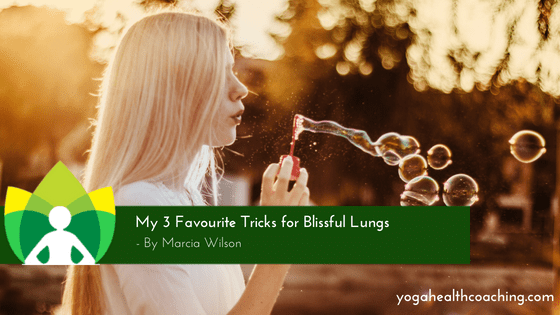 Stress, Asthma and Disease – My 3 Favourite Tricks for Blissful Lungs

In Personal-Healer, Posts by Marcia Wilson

When I was a child, my family used the traditional medical model to ease my migraines and asthma. The medication used for my headaches- a mix of caffeine, codeine, and barbiturates- would ease the pain and vomiting and induce sleep.  My asthma was treated with a pill. It was the path my parents and doctors knew and the path that became my go-to.

The migraines eased when I was 10.  But year after year my asthma worsened. Characterized by an overactive immune system and inflammation of the airways, asthma can be experienced as restricted breathing, coughing and wheezing.  It can be triggered by infections, allergies, strong emotions, and exercise.

My triggers?  All of the above. As an adult, I became so sensitive to cat dander that my office was off limits to co-workers. My regime of medications included three inhalers, antihistamines, and other oral medications.  A cold? Five days on prednisone. Thrush from the prednisone? Try an antifungal. I became a medication expert. And I began to wonder what would happen if I contracted something like H1N1. Would I be admitted to a hospital? Would prednisone, a drug with serious side effects, become a daily go-to?

Faced with the challenge of frequent flare ups, I began to experiment with alternative and complementary health care. I dabbled in supplements and spent money on tinctures and acupuncture. Progress was slow.

Then I hit a turning point:  my doctor recommended I try a new medication- a designer drug used to treat severe allergic asthma. I’d receive injections every three weeks- and be at risk of anaphylactic shock after each treatment. I was dumbfounded. Designer drugs? Me?

This wake up call invited me into a deeper question – how could I stop the cycle of inflammation and illness?  How could I bolster my health so that exposure to allergens and viruses did not trigger such a massive response from my body?  I realized I needed to look at the heart of what was making me sick. I had to start taking full responsibility for my health.

Self Care + Daily Routines of Ayurveda

My journey began to shift more fully once I was introduced to Ayurveda, an Eastern model of medicine from India. I had looked to yoga as a way to manage stress, and Ayurveda was a key teaching in the first training I attended. Ayurveda can include consultations with trained physicians and treatments like massage, oiling, enemas and dietary changes. But my curiosity was most peaked by a book I found which depicted the daily routine recommended by Ayurveda.

Based on the Ayurvedic clock and the doshas, energies that dominate different times of the day and seasons of the year, Ayurveda recommends specific times of day to eat, sleep, and do other types of self care. Awake before sunrise. Early morning meditation. Eat your biggest meal at midday. It was the first time I had seen self care mapped out as a routine – one that looked nothing like my current day.

From the perspective of Ayurveda, disease has three causes: making negligent choices, disrespecting your senses, and living out of rhythm.   I needed to understand how my constitution was leading me on a path towards lung issues, and how to line up my lifestyle with the natural world around me. I had to give myself a chance to create physical and mental resilience by eliminating key sources of stress.

The first shift I made? Eating in a way that honours the 4 season climate I live in. Hot water therapy became a habit that I still use daily: I carry a thermos of hot water everywhere I go and sip from it throughout the day. Cold air conditioned offices warrant hot water therapy in the same way that cold winter days do. I never drink ice water, and only switch to room temperature water when it really heats up.

Lemon is too drying for me – so I quickly became used to plain water.

This pattern is also mimicked in my food choices. I eat warm foods like soups and stews in cooler times and limit my intake of raw cold foods like salads and raw veggies to the hotter months. I learned to protect my ability to digest, my digestive fire, by not dampening it with cold food or drink during the coolest seasons.

Learning to let go of my night owl tendencies was another change that shifted my health. When I began to experiment with an earlier bed-time I realized that I had been living in a state of chronic sleep deprivation. I was able to see that fatigue was triggering stress in my personal relationships and at work, and that going to bed early was one of the most impactful ways I could create more ease.

Ayurveda recommends we go to bed before 10pm and rise before 6am.  Embracing this schedule has made it easier for me to work, be in relationship with friends + family, and find ease in challenges. More ease means less stress and fewer flare ups.

My final big learning came about when I noticed how often I carried worry and stress in my body.  Learning how to develop a soft and sweet relationship with my breath was new for me. I was used to pushing myself hard and breathing hard. Learning to use a mantra was one way I created a more friendly relationship with my breath.  Practicing ujjayi or ocean breath was another. I began to recognize how often I was tightening my torso in a way that stopped me from inhaling deeply.

Learning how to deepen each in a breath and slow the release of each out breath helped me create a baseline of groundedness that I could access anywhere. Breathing became my go to way to recognize when I was stressed and the main tool I used to re-establish myself in a space of ease.

Freedom in breath is the exact opposite of the experience of asthma. Working with this technique gave me the ability to stay calmer and more relaxed when I was sick. This means less constriction, less medication, and less uncertainty.

I’d love to say that my asthma has disappeared and I no longer need my inhalers. While this is not true, I have significantly shifted my lung health.

Freedom from daily medication use is a significant gain for me, as is the ability to breathe freely and to worry little about exposure to allergens. I rarely need prednisone. My entire system is less inflamed and less at risk for a flare up.  Living in line with nature, making discerning choices, honoring who I am – this is how I love my lungs.

Marcia Wilson is an Occupational Therapist, yoga studio owner, and certified Yoga Health Coach (certified) in Kamloops, BC. A life-long learner, she’s navigated career changes, motherhood, health issues and marital breakdown with increasingly refined skills gleaned from the world of yoga and ayurveda. Her current passion? Supporting others on their journey of evolution by sharing the simple self care practices that have shifted her into a consistent space of clear energy and deep connection.