Three Smart Ways to Lean In and Leap

Have you been feeling some movement from deep inside to make a leap in your work? Maybe to a new position within the same organization? Or maybe into a whole new career?

It took time to build the confidence, systems and support to make my own leap. After almost twenty years with the same company, I was able to make the leap by establishing a clear pathway towards my love for yoga, aligning with nature’s rhythms and habit evolution. Here’s a summary of my journey and a few tips that may help you on yours.

I am a lifelong learner and someone who is always seeking new avenues for personal and professional development. While working full time, teaching yoga, and running a yoga studio, I began participating in the educational courses at Yogahealer.com. I began with my first Yogidetox in 2010 followed by the Living Ayurveda Course in 2011. This would launch my family and I on a multi-year journey towards greater health, vibrancy and connection. It would also project me personally and professionally towards a new level of confidence, a renewed clarity of my own desires and connect me to a supportive tribe, which would lead me towards the creation of my own business.

In 2014 I began the Yoga Health Coaching program. I had a 3 month old and was juggling being a new mom, embarking on a new learning path and working full time. I would kiss my son on the head as I left him with loving childcare in our home and find myself arriving at my office thinking, “Really? You’re going to leave that ball of LIGHT to come in here and do THIS?”  The first time I had this thought I broke down in tears between emails and phone calls. The second and third time it happened, it became more and more obvious I needed to do something about it.

But what was I going to do? I was terrified. 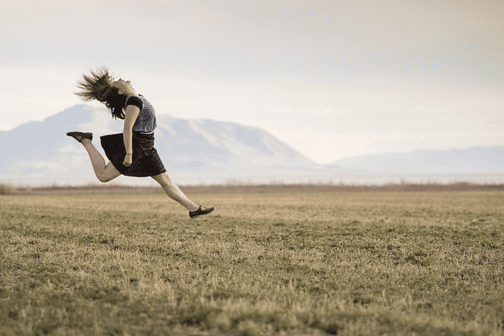 Some days the idea of leaving seemed so simple. It was a small reorienting of my life’s purpose, no big deal.  Right? In the relative domain, all I had to do was write a letter of resignation. Piece of cake. All of the details felt soooo BIG!! For weeks I found myself paralyzed with resistance. The pulsation of fear and possibility would move with a force that would somedays drive me to tears. I would later learn these two emotions, uncertainty and possibility are on the same energetic spectrum and have similar responses in the physical body.  They feel the same, it was how I was framing the feeling. What if I could reframe the feeling I had defined as fear or uncertainty in my body as a feeling of possibility or excitement? What if I could begin to build a relationship with both the uncertainty and the possibility in a way that would no longer be so paralyzing?

This launched me into a series of practices that would help build my confidence and reset my mind to taking the leap, write a letter of resignation and step into the next chapter of my life. Here are three practices that significantly helped me:

Begin to recognize your own voice of uncertainty or fear. Spend a week writing down all the fears, fixed thoughts or limiting beliefs.  Start noticing how you are talking to yourself around making a shift.  The talk that surfaces when you begin to think of yourself in a new role, new chapter or new way of being.

2. Cultivate a Relationship with Possibility.

When your mind starts playing the old story, actively replace it with the voice of possibility. Use this as an affirmation when the voice of fear presents itself and start to carve a growth mindset around the conversation, one that is in the field of potentiality and possibility.

Through this exact practice I realized I had an old belief that I needed a job with a benefits package and I wouldn’t be able to afford it as an entrepreneur. Given the organization I worked for was well-known in the community for having a great benefits package, why would I leave when it was so sought after? The funny thing was, when I began untangling my story around the benefits, I realized I didn’t actually “benefit” from all aspects of the so called benefits package. They were benefits to some people, but not me. The more I sat with my story, I tracked it back to advice I had been given when I graduated from college and going off on my own to “get a job with benefits.”

By revealing the old story of needing my work to have a great benefits package, I realized the real benefits were working in greater alignment with my purpose, having more time with my family and creating my own schedule. It was clear my outdated belief and story had become a true obstacle and it was holding me back from the life I desired. 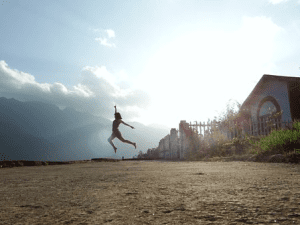 I rewrote the story and aligned with my higher truth. I re-framed the physical sensations I had once associated with fear and uncertainty to “possibility” and “excitement”.

The gap between the two extremes lessened. My mindset shifted, I gained clarity in my vision for my future and I was able to take the leap with a renewed sense of myself. I now benefit from more time with my family, being in charge of my schedule and working daily in alignment with my higher purpose.

And most of all, I learned that the distance between uncertainty and fear was up to me, and wasn’t such a big leap after all.

Rachel recently left an academic administrative position of almost twenty years to dedicate herself more fully to helping others tap into their purpose, align their habits with their deeper wisdom while redefining their relationship with time. She is super stoked to be the Coaching Team Manager for Yogahealer & Yoga Health Coaching. This merges her savvy admin skills with her love of conscious business. She’s an entrepreneur, a mother, a wife and a lover of wild places. As a Certified Yoga Health Coach, with an MA in Environmental Studies, and Certified Yoga Teacher, she’s primed to provide another level of conversation at this dynamic intersection of yoga, ayurveda and living in alignment with nature.